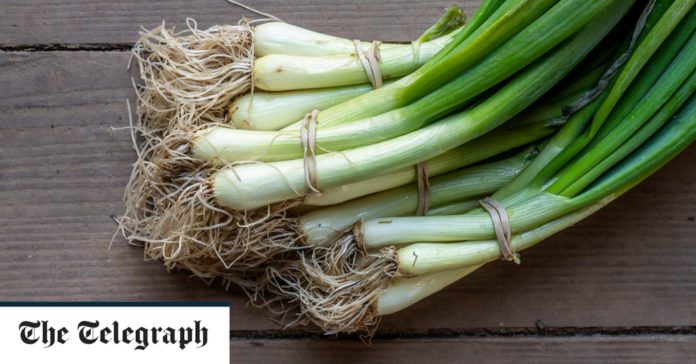 Life without onions is unthinkable for a cook. They are incorporated into recipes across cultures, from Burmese kyethun kyaw to Bavarian zwiebelkuchen. Here in Britain, it’s rare to find a tasty dish that doesn’t feature them in one form or another – they’re as British as potatoes.

Onions grow well in our climate: our farms produce nearly 450,000 tonnes per year. And like canned tomatoes, they are a staple, always on hand. We don’t consider them seasonal – but British onions have a season, albeit a long one.

The main harvest is harvested at the end of August and September and stored in cold storage. This allows us to continue until spring, but next month the sheds will be empty. And – although the producers won’t thank me for saying this – the quality can deteriorate. Slice one up and you’re more likely to find moist dark layers among the concentric rings. Delete them and the rest may be salvageable, but it’s depressing work.

Onions also tend to sprout, so at this time of year it’s important to store them in the fridge – which, incidentally, will also make them less likely to make you cry when you slice them.

If they sprout, in a pinch, you can chop up the green sprouts and add them to the pan. Depending on the variety, they may even be mild enough to use raw like spring onions. But the energy that went into that shoot was taken out of the bulb. What remains will be harder, drier, more flexible. Not fun to cook with.

The supermarkets’ response is to import onions, first to guard against the decline in quality, then to fill the void. Who can blame them? We demand ‘perfection’, unblemished consistency throughout the year. Few shoppers would put string-like onions in their cart.

Examine the box they are stacked in and the original label. Over the next two months you will see more and more that the onions are not British, but from the Netherlands, Spain or New Zealand. Yes, New Zealand: it’s a long way to go for onions.

So what, you might say. Food miles are a complicated issue, and proponents of importing fruit and vegetables point out that the carbon footprint of growing, say, tomatoes in a heated greenhouse in the UK could well be higher than that of driving them from sunny Spain. If we want to eat tomato salad in April, British may not be the greenest choice. On the other hand, fresh produce has a high water content. So when we transport fruit and vegetables from increasingly drought-affected southern Europe and Africa, we send their water to each other.

The truth is, we don’t need traditional brown onions all year round. Other alliums such as leeks, spring onions or wild garlic can perfectly fill the gap or perfectly complement the thinner ends of the season, also doing the same job, if not better. Alice Waters, the American chef who created the legendary Chez Panisse in California, remarks that leeks in a soup make flavors “more integrated and refined” than onions.

They roast remarkably well too, with a soft, creamy nuttiness that’s different from the caramelized sweetness of a roasted onion, but just as good. Slivers of spring onions are much more summery than sliced ​​onions in a salad, and a scattering of chopped chives, like hundreds and thousands of savory greens, can provide subtle little pops of flavor.

So it’s time for cooks like me to broaden their onion horizons and learn to love alliums. Know your onions – and know when to choose an alternative.