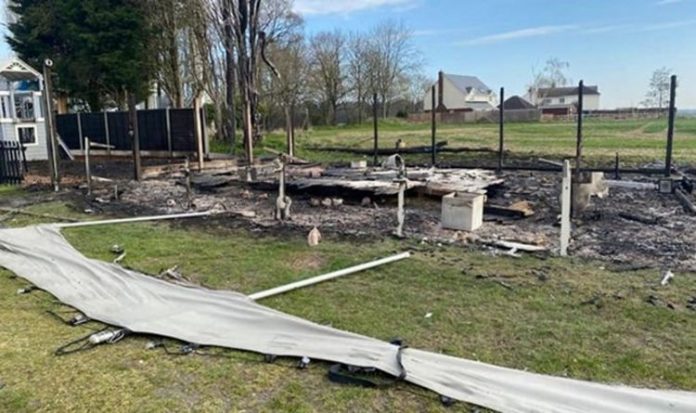 In the wee hours of Wednesday morning, the White Horse pub in Tea Green, near Luton, was “sprayed” with liquid and set on fire. Shocking CCTV footage shows the £ 25,000 beer garden bursting into flames. Devastated owner Jon Haines believes the ‘secret garden’ has been targeted in an alleged arson attack. Hertfordshire Police have also confirmed they are treating the blaze like arson.

Mr Haines said Wednesday: “At 1am someone set fire to our new patio area.

“CCTV shows someone climbing on a structure and watering it.

“And then, a few minutes later, you see it going up like an explosion.” It was definitely on purpose.

The pub garden had undergone a complete renovation before the pubs reopened on Monday.

Mr Haines told BedfordshireLive: ‘What a waste of three months building it. We put so much effort into making it the best it can be for us and our customers, it was such a shame.

“It was a big feature film, a place wow, but I think that’s why it was targeted to be honest.

“We called it the secret garden, it was a completely covered terrace. A living room area with a fireplace and a sofa.

“That’s a lot of lost income in terms of capital cost and future income cost.”

The destruction is expected to cost at least £ 2,000 per day in lost revenue.

“We will rebuild – bigger and better we hope. We are just grateful for all the support we have received.”

A spokesperson for Hertfordshire Constabulary said: ‘An investigation is underway and any witnesses or anyone with information should call the non-urgent number 101 citing the crime reference 41/26964/21.

You can also remain 100% anonymous by contacting the independent charity Crimestoppers on 0800 555 111 or via their online form not found at crimestoppers-uk.org. “