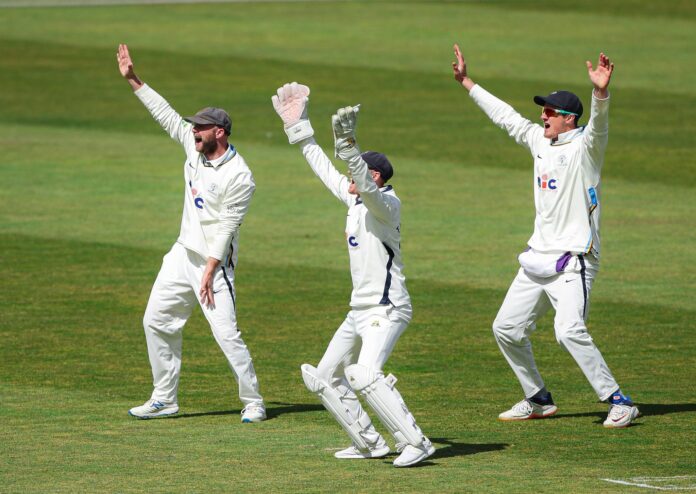 Yesterday there were signs of a new “Kent bypass”.

The last team in the County Championship Group three singularly failed to play to that standard, scoring a respectable 224-7 against Yorkshire after being sent at bat.

Zak Crawley, the England hitter, led the way with 90 and Jack Leaning, with whom he shared a position of 79 in the fourth wicket, hit 47 against his old club.

That Yorkshire played well for long periods was reflected even more favorably in the visitor display; “There are no easy games in Group Three of the County Championship, you know that,” joked an imaginary joke from the imaginary crowd.

“It was hard work and to be fair to them Crawley and Jack Leaning played very well,” said Steve Patterson, the Yorkshire captain.

Patterson said the decision to bowl was due to Yorkshire expecting a surface similar to the livelier one against Northants last week, only for it to be slower with less bounce.

“The field was probably very different, but I thought the way we stayed was really nice,” he added. “We still have a new ball in the morning and if we can throw them for 240/250, I think we would be very happy with that.”

In the final championship game at Headingley before the expected return of the crowd, Yorkshire found itself facing the team that provided the opposition when the crowd last saw the championship cricket on the ground.

On that occasion, Kent won by 433 races to achieve the largest victory by a race margin in its history and to inflict its toughest defeat on Yorkshire.

Times have changed in more ways than one, and the anticipated pattern seemed to have set in here when Ben Coad hit the game’s sixth ball on his return from a shoulder injury.

Coad had Kent’s captain, Daniel Bell-Drummond, cleverly caught bass on the third slip by Harry Brook, and money wise would have been in a constant rattle of wickets.

But Crawley showed the first signs of being determined to put a disappointing start to the season behind him (half a century in eight innings), with a drive from Coad to the edge of Kirkstall Lane so exquisite it was really wasted on something less. than a full house.

Yorkshire, however, revealed little and pitched accurately in the milky sun that sometimes peeked through the clouds, led by miser Jordan Thompson and Patterson himself.

Both struck before lunch to leave Kent 66-3 after a morning that was not so much Darren Stevens as stevens pairs, with both sides having reason to be relatively satisfied.

Patterson advanced Jordan Cox to the second slide, where Adam Lyth kept moving to his right, and Thompson induced a loose shot from Joe Denly that also flew into safe Lyth hands.

Thompson’s window came during an impressive spell at the end of Kirkstall Lane, as the Yorkshire off-roader found plenty of room to go with the nous.

It took Leaning 28 balls to get off the mark, a long time to think about a third duck in a row against his former colleagues after he posted a pair when Yorkshire won at Canterbury last month. Deftly leaning in, Coad swung to the limit of the thin leg to avoid that fate, a blow that followed as he carried the same bowler to the cover rope.

Leaning on has had a hard time lately; his scores going into the game were 0, 0, 12, 0, 2 and 8, with just a fifty in the first game at Northants to lift his spirits.

But as he so often demonstrated in Yorkshire, Leaning is a wrestler who is usually in his prime when things are down, and one can only admire the way he fought and kept Crawley company during a booth that kept Yorkshire for some. years. 32 overs.

Crawley eventually miscalculated one from Patterson who jumped to cover, where Joe Root completed the formalities, Crawley faced 171 balls and hit 13 fours.

Leaning and Ollie Robinson added 62 before Leaning chased a wide from Brook and closed in on Lyth on the slip, having hit 153 balls and hitting six fours.

Moments later, Brook dropped Stevens before he had scored, a difficult opportunity low to his left on Thompson’s third slip. Stevens hit 237 and took seven wickets when Kent won here two years ago, but the miss was not costly as Coad caught him shortly after inducing Robinson to approach Thompson in the middle of the wicket, with rain claiming the final 6.5 overs. .

Support The Yorkshire Post and subscribe today. Your subscription will help us continue to bring quality news to the people of Yorkshire. In return, you will see fewer ads on the site, you will get free access …