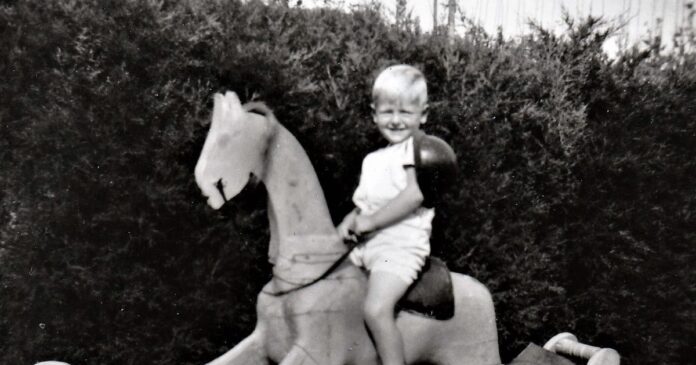 When Allied forces officially announced Germany’s surrender, Britain erupted in street celebrations and King George VI made an appearance on the balcony in London alongside Prime Minister Winston Churchill.

Jack Sweet, 84, a resident of Yeovil, recalled his own experience of Victory Day, World War II and the peacetime that followed growing up on Orchard Street in Yeovil.

Mr Sweet described sitting at his home kitchen table to listen to Winston Churchill on the radio announce that the next day would be Election Victory Day.

He said: “Victory Day remains a memory of joyful people, seeing and hearing thunderbolts go off in King George Street, and a sense of relief even in my eight-year-old mind.

The VJ’s Day celebrations in August are also remembered in Mr. Sweet’s memory, as the family hosted a garden party with jellies, cakes and other restricted foods.

Looking for today’s best stories in one place? Subscribe to our newsletter here.

He said: “We had a wonderful time. Food was collected for these occasions and there were all kinds of treats we had never eaten before.

Mr. Sweet’s only memories until the age of eight are from wartime, which makes periods such as nighttime blackouts seem “perfectly normal”.

He said: “We were basically treated like little adults – we were only 40 years old in the Victorian period, so we were still living in this particular environment and people would be more accepting of the regulations.

“It’s quite remarkable: even today I feel guilty if I go out into the garden at night with a torch and want to point it to check something in a tree.

“I feel guilty because, if you had a torch in the war, the last thing you did was point it up in the air because that could be seen as a signal to enemy planes.

Mr. Sweet recalls once seeing a column of gray smoke heading towards Sherborne and watching a descending parachute figure, which turned out to be a downed RAF pilot.

An air raid shelter was built by the Yeovil Borough Council at the end of Sweet Garden in the summer of 1940 to accommodate six neighboring households next to theirs.

The shelter was equipped with benches and they brought an oil lamp for the “miserable” cold and damp nights spent there with the sound of German aircraft engines above their heads.

Mr Sweet said: “If the Germans were attacked they would run around and take the devil out and drop their bombs where they could, so you never knew. You could hear them go – I can still hear the engines.

Although his parents never showed fear, Mr. Sweet noted that they must be “terrified out of their minds”.

Although Mr. Sweet never remembers being afraid during the war, he does recall an occasion after the war ended when he heard his father’s workshop radio and was terrified.

He said, “Suddenly there was a loud whistle on that radio and I thought it was a bomb falling. I remember waking up and being terribly scared, but it was just something in a play on the radio.

Mr Sweet and his late wife Margaret on their diamond wedding anniversary in December 2018, with their three daughters. (From left to right: Kathryn, Nicola and Suzanne)

One element of war life that Mr. Sweet remembers vividly is the US military raid on Yeovil.

He said, “They seemed to be everywhere and to us young people they were really something.”

Mr. Sweet remembers begging the IGs with the call of “any gum chum” in an attempt to secure a stick or packet of gum.

He said, “I can still taste it and there has been nothing to match it since, at least not in my opinion!”

The post-war years were still marked by some restrictions, but Mr. Sweet noted that things “got a little looser”.

He remembers a number of changes, such as the ability to travel by train or car, the reduction of military personnel in the city, as well as power cuts and bread shortages that led to rationing.

Despite the rationing in place, the Sweet family was relatively self-sufficient, growing vegetables and raising rabbits.

very, very sweet canned milk that almost looked like molasses. After the war was over, we started to get some cream.

When Mr. Sweet was 18 he joined the RAF, but due to sight problems he was unable to fly. He left the armed forces after three years.

He said, “You wanted to be a soldier, because you liked the idea, but the reality was a little different when you got to this point.

“My father was in the First World War and he received the military medal as a runner. Their life expectancy was not great, but my father being a fairly short man, he was nimble and managed to keep himself alive for six months before he was injured.

“We all aspire to be heroes, shall we say? The army was our heroes.

Mr. Sweet has lived in Yeovil his entire life, with the exception of his three years of service, and has written a number of books, including two focusing on Yeovil in WWI and WWII.