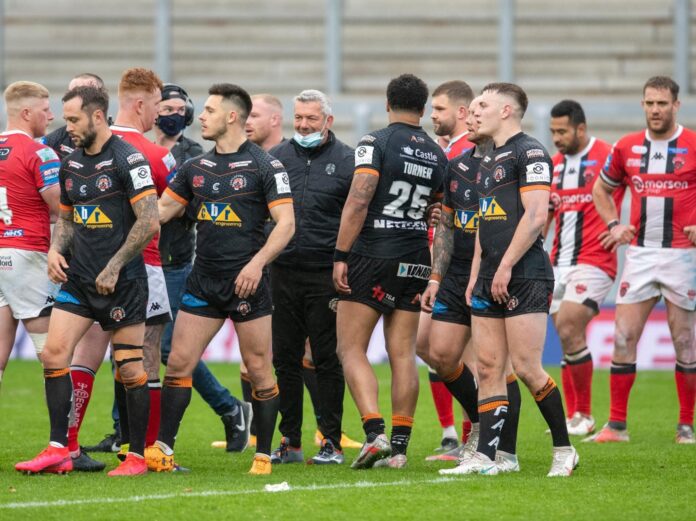 Coach Daryl Powell, center, with his Tigers players after the dramatic win over Salford. Photograph by Tony Johnson.

The Tigers beat the Salford Red Devils 19-18 in a dramatic quarterfinal at Emerald Headingley, a month after an overtime win over Hull KR in the previous round.

Coach Powell’s team hit back 6-0 and down 12-6 to lead 18-12, but Salford scored a converted try on the final play to send the tie to a sudden death.

Salford had the first chance, but McShane loaded up on Kevin Brown’s drop attempt and took possession to set up O’Brien’s winning goal.

Powell said: “A lot happened in that game.

“It was always going to be a tough and close game with the conditions they were in.

“Salford defended very well and we had to work very hard with two ties to sin.

“I think we did very well to fight through some difficult periods and that Paul McShane’s play was pure class.”

The Tigers were briefly reduced to 11 players in the final stages after O’Brien and Liam Watts were sent off for sin following separate incidents.

“Going down to 12 and then to 11, it’s very difficult, to be able to defend against a team with Salford’s ability.

“Kevin Brown really worked hard to put us under pressure, it was really challenging and [Tui] Lolohea was a real threat to her running game.

“It was huge for us to keep them out when we were 12, I thought it was a huge effort.”

The Tigers faced Warrington Wolves, the club Powell will join at the end of this season, in the semi-finals, to be played on June 5.

Powell said: “That’s what I thought before the game.

“Obviously it’s a tie, so you don’t really know, but I had a feeling it would happen.

“It is an interesting game, they are going quite well at the moment, they have only lost against us and we played them two weeks before. [the semi-final] so it will be an interesting period for us. “

Tigers forward Grant Millington suffered a knee injury that Powell says will keep him out of his next game, against Hull KR.