THE brother of a rugby player who broke his neck has given people an update on his recovery.

James Lasis was seriously injured playing in a rugby match for Stade Niçois against Narbonne in France. The second-rower underwent surgery for a cervical sprain. James has now had a second operation to reduce a build-up of fluids in the brain.

James’s brother Matt, who plays rugby for Hinckley RFC in Leicestershire, has confirmed the success of the surgery and that the 25-year-old is making slow progress in his recovery, according to his doctors at the Pasteur Hospital in Nice.

Matt said in an Instagram post that the former Brighton College student, from Haywards Heath, wants to show his gratitude to well-wishers.

Matt said: “James has asked me to say a massive thank you for all the love, support, messages and donations. Mum, Dad and I say thank you too.

“It’s been a hard two weeks, but looking back, James is in a much better place than two weeks ago and so are Mum, Dad and I.

“The progress is proving, as the doctor said, to be slow, but the Big Man is still smiling.

“It must be incredibly scary, frustrating for him to lay there unable to move or speak. Mouthed words with a load of tubes in the way, are difficult to understand, trust me. But we’re working through it. He can still bring a smile to our faces with a cheeky wink and even a bop of a shoulder to some music.

James is still in good spirits and will have a tracheotomy to open the airways in his neck. If successful, the surgery will help James speak and eat again. 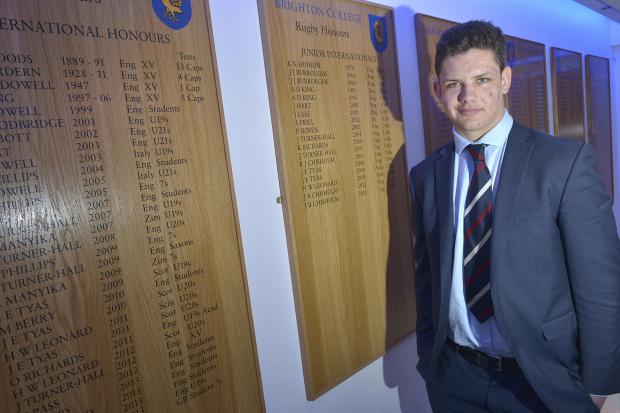 James Lasis when he was at Brighton College

“The next step is for him to have a tracheotomy, which will give the big man the chance to speak a little and possibly even eat, which he is very excited about.

“He is also working hard with the physiotherapist, to get him breathing on his own. He is growing stronger day by day.

“Your messages and videos have been invaluable in keeping him positive! Please keep sending them, like I say, keep it light, funny, banterous and he’ll love it. I’ve become his personal secretary endeavouring to show him all the messages he receives, they always bring a smile to his face.”

“Thank you again, so much! #lasistrong. Photo cred to @gigzz.psd for the artwork thank you.”

A fund has been set up for James since his injury called The James Lasis Support Fund. The fund has raised over 20,000 euros. The donations will go towards James’ medical bills and any other recovery costs.