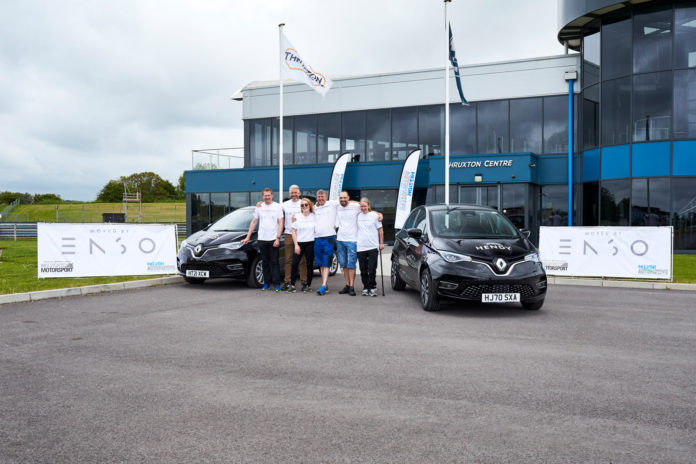 A standard Renault Zoe traveled almost 425 miles on a single charge, breaking the previous record of 351 miles, also achieved in a Zoe in 2018. The Zoe record, an E-Tech R135 EV 50 GT Line, traveled precisely 424, 7 miles. on the Thruxton racing circuit in a hypermile efficiency race lasting nearly 25 hours and at an average speed of 19 mph.

It was accompanied by an identical model but fitted with a different type of low rolling resistance tire made by Enso, a new environmentally friendly manufacturer. So equipped, this model covered no less than 475.4 miles, which equates to an 11.9% increase over the regular Zoe. The ranges that both cars achieved contrast with Zoe’s official WLTP range of 245 miles, although it is achieved in a much wider range of speeds and conditions.

Besides the special Enso tires fitted to one of the cars, the Zoes were completely standard and supplied by Hendy, a group of car dealers. To increase their efficiency, all comfort functions, including heating and air conditioning, have been deactivated but the tires have been inflated to standard pressures. To conserve battery power at night, the headlights were not used; instead, drivers wore night vision goggles and were only guided by the car daytime running lights that illuminated the fluorescent beacons on the track.

The Zoes were driven by members of Mission Motorsport, an armed services charity that helps rehabilitate veterans. Six drivers took part in the exercise, each taking turns doing 20 mile stints. To prevent factors such as body weight and driving style from skewing the results, participants drove both cars.

The previous hypermile record had been reached by a single driver on the Paris ring road. Thanks in part to strategies that included tailgating trucks, his Zoe reported 7.9 miles per kWh. This compares to 9.1 miles driven by the standard Zoe R135 EV 50 and 10.5 miles driven by the Zoe running on Enso tires.

While behind the wheel of the Zoes, drivers drove barefoot, putting the throttle on with their toes and choosing the best and least fuel-consuming lines. Linda Noble, one of the pilots, said: “I alternate between exhaustion and excitement. It was boiling during the day with no air conditioning and cold at night without heating but I loved every minute of the challenge and am very proud of the team.

The best lap times at the Nürburgring: the final results