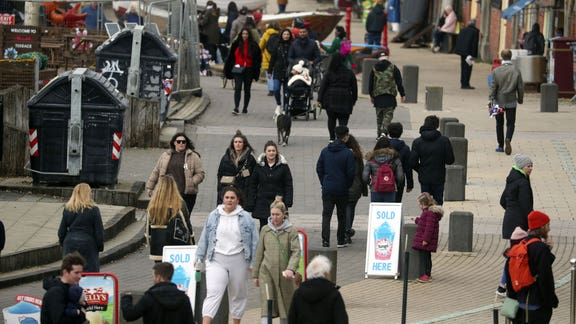 The number of confirmed coronavirus cases in the UK has increased by 74% since last week, new figures show.

The jump is the highest in daily infection rates since February and means the total number of cases since the start of the pandemic is now 4,535,754.

The government said as of 9 a.m. on Wednesday there had been 7,540 more laboratory-confirmed cases in the UK, the largest single-day increase since February 26.

The government also said six more people died within 28 days of testing positive for Covid-19 on Wednesday, bringing the UK total to 127,860.

Separate figures released by the Office for National Statistics show that there have been 153,000 registered deaths in the UK where Covid-19 was mentioned on the death certificate.

It comes as Professor Neil Ferguson of Imperial College London, whose modeling was instrumental in the UK’s lockdown in March 2020, said new modeling data submitted to the government suggests a risk of ‘third substantial wave’ of coronavirus infections in the UK.

Professor Neil Ferguson said delaying the full reopening on June 21 would make a difference as it would allow “more people to get a second dose.”

He said there is “reasonably good data” on the effectiveness of Covid-19 vaccines with respect to hospital admissions, which are “in the range of 90-95%” for the Alpha variant. (United Kingdom) and “about 90%” in the Delta Variante (India).

Professor Neil Ferguson said the modeling suggests there are benefits to “putting more vaccines in more arms as it reduces the scale of any third wave.”

He said: “I think, more critically, that in the next two or three weeks, we’ll be in a better position to really refine those estimates by saying ‘OK, those early projections may have been too optimistic or pessimistic.’ … And this will be motivated by the simple observation of hospitalizations and, unfortunately, of certain deaths. ”