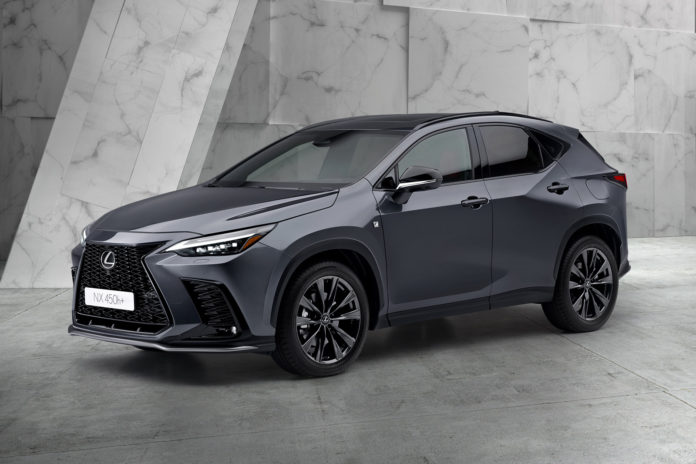 Lexus debuted the second-generation version of its NX crossover, which acquired a 302bhp plug-in hybrid option along with a bold new cabin design and evolved exterior styling.

The latest iteration of Lexus’ best-selling model in Europe comes shortly after the brand’s announcement that it will step up its electrification efforts with 10 new hybrid, PHEV and pure-electric models by 2025.

The new NX is a key part of this assault, bringing with it the NX 450h +. This is the first PHEV offered by Lexus, which previously used parent company Toyota’s “self-charging” hybrid technology for its electrified powertrains.

The NX 450h + uses the same gasoline-electric setup as the closely related Toyota RAV4 and Suzuki Across SUVs. It combines a 182 hp 2.5-liter naturally aspirated four-cylinder petrol engine with a 180 hp electric motor on the front axle and a 54 hp engine at the rear for permanent all-wheel drive and 0 stroke time. at 62 mph for just over 6.0 seconds.

With the electric motors drawing their reserves from a ground-mounted 18.1 kWh lithium-ion battery, the NX 450h + claims an electric range of 40 miles and can run with the gasoline engine off at up to 84 mph. When the battery is depleted, the system operates as a “self-charging” Lexus hybrid, making it 20% more efficient than competitive PHEV SUVs.

Overall, Lexus estimates CO2 emissions at less than 40 g / km and an efficiency rating of over 94 mpg for PHEV.

The second new NX variant available in the UK will be an evolved version of the NX 350h hybrid, which is reportedly 22% more powerful, emits 10% less CO2 and is 15% faster than the current model. The electrified 2.5-liter four-cylinder sends 239 hp to the front or, optionally, to both axles, delivering 0-100 km / h in just 7.7 seconds and a towing capacity of 1,500 kg .

With a 20mm lower center of gravity, increased track width at each end, and better weight balance than ever before, the NX is said to deliver the “Lexus driving signature.”

New body materials and new welding techniques mean the shell is stiffer, and professional racing drivers have been involved in the development process to measure throttle and brake responsiveness.

Equally important to the crossover is its redesigned interior: the NX is the first production car to feature Lexus’ new Tazuna cockpit design, introduced in 2019 by the radical LF-30 concept.