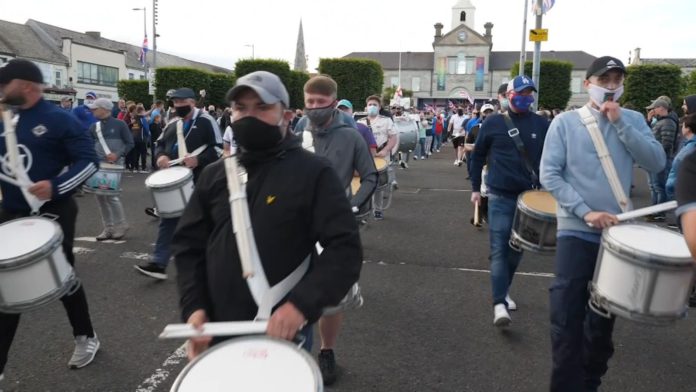 They were beating so loudly in Newtownards, County Down, you could almost hear them in Downing Street.

Loyalists take to the streets of Northern Ireland almost every week to demand that Boris Johnson remove the border from the Irish Sea.

Jamie Bryson organized this rally. A loyalist close to the thinking of certain paramilitaries, he says the government has a choice to make.

Mr Bryson said: “It is written on the banner peace or the protocol, it’s your choice. They can listen or they cannot listen.

“But if they want to have peace and stability in Northern Ireland, then they are going to have to change the partition of the UK.”

Asked about the danger of taking people to the streets, he said it was more dangerous to divide the UK.

“If unionism can’t stand up now and take to the streets now, then what else are they doing?” He asked.

Speaking at Friday’s rally, speakers like Baroness Hoey said the protocol threatened the Good Friday deal rather than protecting it.

The maritime border has left this community isolated from the rest of the UK, its British identity threatened.

Heather Ramsay, who attended the protest, said: “We have to get rid of the protocol. The protocol has to go. It dilutes our unionism with Britain.