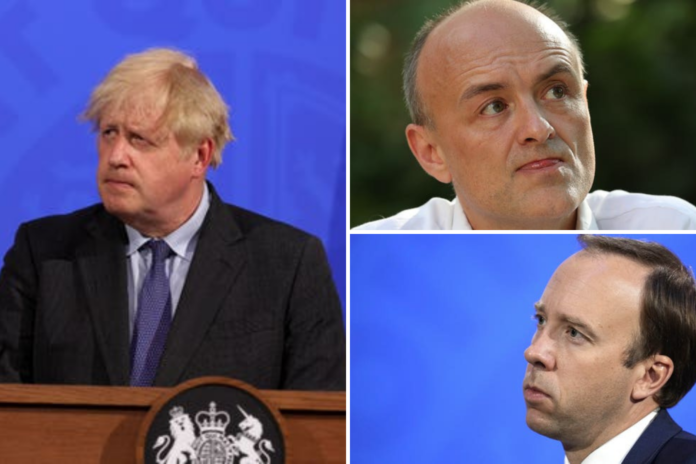 The former prime minister’s aide blamed Mr Hancock for failures in Covid’s response, posted a screenshot apparently showing a WhatsApp exchange between him and the prime minister.

Along with the image of WhatsApp’s apparent exchange with Boris Johnson, the former chief assistant to the Prime Minister Dominic Cummings tweeted ‘fucking desperate’, and his account to MPs was fictional. ”

According to published messages, on March 3 last year, the controversial former aide pointed to the increased testing capacity of the United States and criticized Mr Hancock for saying he was “skeptical” about to the achievement of a goal.

The message had many typos and read, “The United States has gone from 2,200 tests a fortnight ago to 27,000 a week ago to 100,000 yesterday. This is what we said we shd do. Instead, we’re still stuck on around 5-7,000 and MH says today he’s “skeptical” of hitting 10,000 by Monday, which he says will happen. “Certainly” Tuesday. This means that tens of thousands of NHS staff will not be at work for the next critical 3 weeks – other than my previous point, the new test is an integral part of the evacuation plan… ”

Mr Cummings, who left Downing Street in November during a bitter power struggle at No 10, has targeted much of his criticism since leaving the Health Secretary.

In a blog post of over 7,000 words, Mr Cummings also posted another private message about the difficulties in obtaining ventilators for Covid-19 patients.

“It’s Hancock. He was desperate, ”replied a contact appearing to be Mr Johnson on March 27 last year.

In another post, on April 27 last year, the Prime Minister appeared to call the situation around personal protective equipment (PPE) a “disaster” and alluded to the transfer of some responsibilities to Cabinet Minister Michael Gove.

“I can’t think of anything other than removing Hancock and putting Gove on,” Mr Johnson apparently added.

Mr Cummings asked questions he said should be asked of Boris Johnson about the government’s handling of the pandemic.

He wrote: “Considering his failures in testing, nursing homes and PPE, why did you keep a secretary of state, you described yourself as’ totally f ***** g hopeless “and how many people have died as a result of your failure to remove it?

“Why is No10 lying, including in Parliament, that the original plan was ‘collective immunity by September’ and had to be scrapped?

“When did Patrick Vallance update you with NHS data showing the death rate at the first April peak was much higher than before / after the peak and do you now agree with Hancock that that each patient received the treatment they needed?

“Do you now agree with Hancock that there was no shortage of PPE or do you agree with yourself in April 2020 that the provision of PPE was’ a disaster “that required moving Hancock?

“How many people have died in nursing homes because of what you called the PPE ‘disaster’ and what you called Hancock’s ‘totally f ***** g desperate’ performance during the tests in March?

“When will the SoS come to the House and correct its many false statements to MPs?”