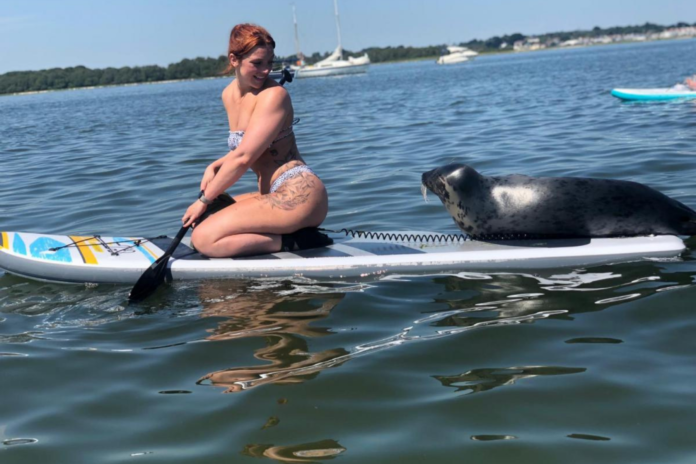 Two paddlers had the surprise of a lifetime when a cheeky seal decided to hitchhike while they soaked up the sun in a UK port.

Rachael Towers and Sam Ball were paddling around Poole Harbor in Dorset last weekend when ‘Simon’ decided to swim and join in the fun.

Britain is home to around 36% of the world’s gray seal population and if you want to spot one on the Norfolk coast, Cornwall and the Scottish coast will likely be your best bet.

As a general rule, you should not approach within 20 meters of a seal unless it is approaching you.

National Trust guidelines state that seals can be curious and friendly towards humans, but you should never approach one in the wild – let them come to you.

Seals are generally gentle creatures unless they feel threatened, moving slowly and being gentle can help keep the seal calm and lead to an amazing experience in nature.

This is exactly what happened in Rachael’s case.

Rachael, Dorchester’s recruiting consultant, said: “We took out our paddle boards at Hamworthy and went up to Arne and we could see the seal in the distance, appear and swim.

“There were people swimming nearby and I was like ‘ah, I don’t want that on my board.’ I was petrified.

“Then he popped his head out of the water and just made a B line towards me and jumped on my board.”

Rachael’s fear of the seal quickly subsided when she realized how friendly it was, the couple even dubbed him Simon.

She said, “He just sat there more than happy, taking a little sunbath. Then he appeared on my friend’s board and lots of people on the boats would stop and take pictures of us.

“He was really cool and nice.

“I was really, really scared, then I realized I had no choice and that he was coming back whether I wanted to or not.

“He was a show pony, he did little tricks in the water and it was really cute.”

Rachael hopes to reunite with Simon in the future and said: “He was around us for about half an hour, swimming with us and getting on our boards, there were also people in the water that he went swimming with. .

“Some people on the boats said they had never seen anything like it, there were a few seals but none interacted with humans – we were really impressed.

“The next time we have good weather, we’ll go back there and see if we can find it. ”