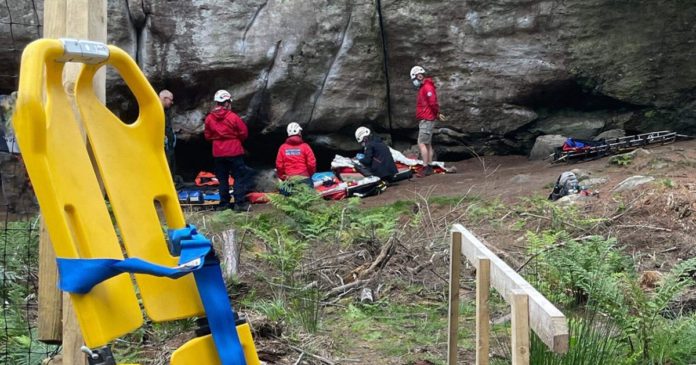 Iain Nixon, team leader, said: “Given the potential severity of the incident, we immediately deployed resources in our team vehicles on ‘blue lights’ and called the teams.”

A total of nine volunteers, along with a community paramedic and a team from the Northeastern Ambulance Service, made their way to the boulder where the injured climber was stranded.

Once the victim was immobilized, the team transported him a short distance to the waiting ambulance – almost three hours after receiving the initial call.

Volunteers were first called in to rescue a woman who had injured her leg after falling in Thrunton Woods.

The walker’s family dialed 999 and a team vehicle was quickly deployed to the scene.

The woman was treated by a community paramedic before the mountain rescue team transported her to the nearby ambulance.

Later that day, another walker injured his lower leg while descending Scald Hill in the Cheviots.

As eight team members drove to the scene, they were told that a local real estate agent had managed to retrieve the woman in their 4×4.

They took her back to the valley where she was treated for her injuries.

Mountain rescue teams are urging people to be prepared when engaging in outdoor leisure activities after being called to 13 incidents in the past two weeks.

“All the incidents in the hills and forests or on the rocks around Northumberland have been real accidents and could happen to anyone, no matter their level of experience or level of equipment,” added Iain.

“Last year and this year we have seen a significant increase in the number of people venturing out and into the hills for leisure activities – walking, running, cycling, etc.

“It’s great that people go out to exercise and all we ask is that if people head for the hills, they do it safely and follow Adventure Smart’s advice:

● Do you have the right equipment?

● Do you know what the weather will be like?

● Are you sure you have the knowledge and skills for the day? “

More information is available at https://www.adventuresmart.uk

For more news from the North East, subscribe to our newsletters here.