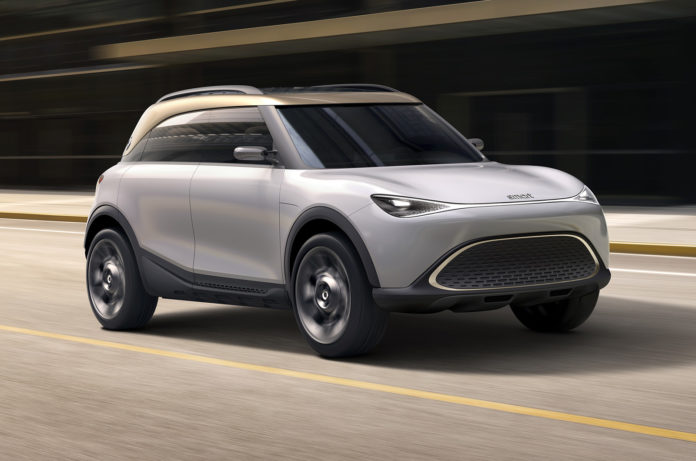 Smart is embarking on a radical product strategy under the leadership of new 50% co-owner Geely and presented Concept # 1 at the Munich motor show as a preview of its first SUV model.

The nearly production-ready concept takes the form of a compact electric crossover with high-end aspirations and a focus on cutting-edge technology. Measuring 4,290mm long, 1,910mm wide and 1,698mm high, it matches in size the EQA electric crossover from parent company Mercedes-Benz.

It is Smart’s first bespoke electric vehicle since becoming the first “traditional manufacturer” to completely abandon internal combustion engines in 2019.

The SUV will mark the start of an important new era for the brand, in which Geely will handle the engineering of the model’s development and Mercedes the design.

It’s clearly recognizable as Smart, but has evolving design elements that seek to promote a “cool, grown-up” brand image, according to design boss Gorden Wagener.

Its features include short overhangs at each end, a panoramic sunroof, frameless doors and contrasting black lower body elements that underline its “ruggedness”.

The rear hinged doors open with tactile light panels, rather than handles, which, with distinctive LED clusters at each end and a unique interior lighting configuration, contribute to the ‘eye-catching light display’ of the vehicle. concept.

Smart says the wheels pushed to the corners of the car and the 2,750mm wheelbase make for an “extremely spacious” interior, which will gain a fifth seat for production.

Elbow room, legroom and storage space would all be on par with vehicles in the upper segments, while the “floating” center console, the absence of B-pillars and the glass roof. ventilate the passenger compartment.

Technical details remain under wraps, but future Smart models will be based on a bespoke EV platform developed by Geely that promises “the highest level of dynamic handling and passive safety”.