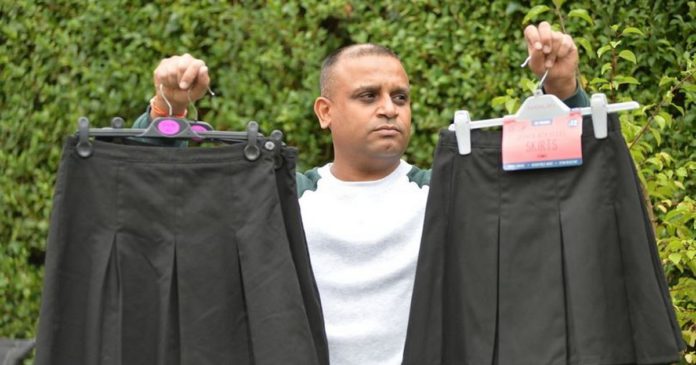 A 12-year-old girl was taken out of class for wearing the wrong type of skirt – her mother saying her hips are too wide for the one she needs.

As reported by Leicestershire Live, Shylah Johnson was isolated at her school, Brookvale Groby Learning Campus in Leicester, after her mother, Daisy Johnson, spent all summer trying to find her a pleated skirt that would suit her.

The principal says they offered to help make a skirt to fit Shylah, but the family and the school were not unable to compromise.

Read more:Go here for the latest last minute updates from across the North East

Due to size issues, Shylah and her mother discovered that ready-made black pleated skirts would not fit properly, after trying a number of different versions from stores such as Marks & Spencer, New Look, Next, Matalan and Primark. vacations.

With Main Street options exhausted, Daisy and her partner, Dharmesh Patel, had no choice but to send their daughter to school wearing a solid black skirt, instead of a pleated skirt.

That day, Shylah was taken out of class and placed in segregation for wearing the wrong uniform.

Daisy said: “We spent hundreds of pounds ordering skirts that didn’t fit and returning them, we tried everywhere. But because she has wide hips and a petite waist, the skirts don’t fit her properly. .

“So we had to buy her a regular skirt that fits her, but she was immediately sent to isolation because it was not pleated.

“She has already missed two tests this week because she can’t go to school full time, all because her skirt has no wrinkles.

“She’s discriminated against, really, because she doesn’t have a body type for their uniform policy. The school even gave us one of their skirts for her to wear and it doesn’t fit her. all around the waist. “

Daisy spoke to the school to try and resolve the issues, and despite discussions with school officials, she was unable to find a compromise.

She said: “They told us to just pull it down and wear it like that for now, but there is a lot of gap in his waistline and it doesn’t suit him.

“It’s not like she doesn’t want to wear the school skirt. She’s in grade 8 and wore one all through her freshman year. But she had a growth spurt during that year. summer and her old one doesn’t suit her.

“She has anxiety issues at the best of times and it really doesn’t help.

“The school told us that if they let her wear a solid black skirt, others would use it as an excuse to wear one. But she didn’t, they should be punished for breaking uniform policy on purpose, Shylah would only break it because she has no other option. “

Brookvale Groby Learning Campus principal Will Teece said the school has come up with a number of different options to try and help Shylah get back to class, including offering to adjust a skirt so that she fits. adapts to Shylah’s measurements.

He said: “The school has had the same uniform policy for many years, we provided the family with a skirt, offered to take them to the stores and offered to have it trimmed – but it just seems like she doesn’t want to wear the skirt.

“We have 1,500 other students who had no problems with their uniforms and settled in well at the start of the new academic year.

“We would like nothing more than to put the student back into a full-time education, and we think we’ve offered more than enough options for the parent and student to do. “