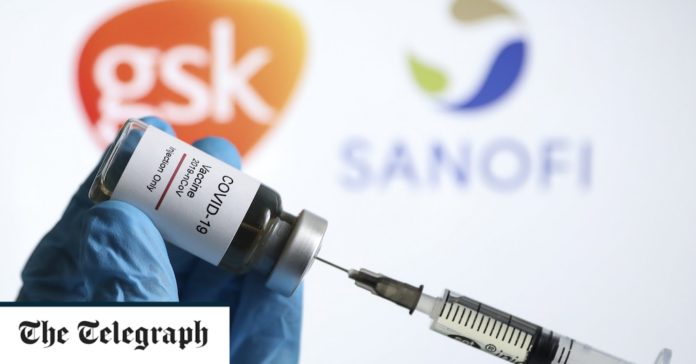 France is finally seeking approval for its Covid vaccine after a series of setbacks that have left Sanofi trailing rivals.

The French pharmaceutical giant, which worked with GlaxoSmithKline on the vaccine, said it was preparing to submit information to US and European regulators for the jab after receiving encouraging data from a late-stage trial.

Sanofi said the vaccine, which was first developed in April 2020, had been shown to create “robust immune responses”.

If used as a third booster dose after two other vaccines, the jab was able to increase neutralizing antibodies by 18 to 30 times.

The trial found that using the vaccine for two initial doses created about double the level of antibodies compared to two doses of a Covid mRNA vaccine, and completely prevented serious illness and hospitalization.

The jab was also able to prevent any symptomatic Covid illness about 58% of the time.

Thomas Triomphe of Sanofi said: “We are very pleased with this data, which confirms our solid science and the benefits of our Covid-19 vaccine.”

He said no other vaccine had been tested when there were so many variants in circulation, including omicron, which took hold late last year.

GSK’s Roger Connor said he expected the vaccine to play “an important role as we continue to fight this pandemic and prepare for the post-pandemic period”.

It comes as Glaxo seeks to focus more on vaccines, as it divests its consumer health business later this year, leaving the company with its pharmaceutical and jab operations.

Britain has ordered around 60 million doses of the Sanofi-GSK vaccine, of which some 7.5 million doses are expected to be delivered as soon as possible following MHRA approval.

The decision to seek the jab’s endorsement comes after it initially failed to produce a strong enough response among seniors in late 2020.

Late last year, the two companies had to delay the release of trial data again because there were too few uninfected people to test the vaccine amid a spike in cases.