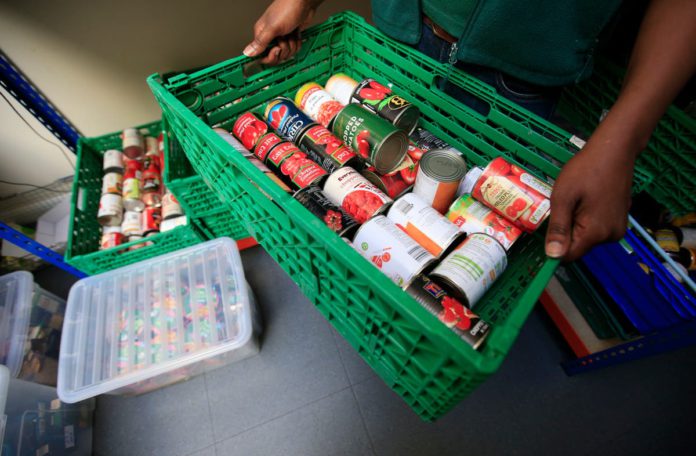 Food charities have warned they are struggling to keep up with demand as new figures show more than four in 10 Britons have cut back on grocery spending due to soaring prices.

A poll by the Office for National Statistics found that 92% of people reported an increase in the price of their food purchases, with 41% saying they had reduced as a result.

The disturbing results are the latest indication that Britain’s cost of living crisis is starting to bite.

It came as former Sainsbury’s boss Justin King warned a ‘golden era’ of cheap food in the UK was over and shoppers should expect higher prices while “adjusting the way they prioritize their budgets”.

Mr King argued that supermarkets could do little to help people by lowering prices because their margins were already low.

Big retailers have come under pressure to keep prices low after reporting strong financial results, while many of their customers struggle to make ends meet.

Mr Rose told the BBC Today Program: “I think we may have gone through a golden era”.

He pointed out that, on average, households spend less of their budget on food, although he admitted that low-income families have limited ability to cope with rising prices.

FareShare chief executive Lindsay Boswell said demand for food is “higher than it has ever been,” with 90% of charities reporting an increased need.

Sabine Goodwin, coordinator of the Independent Food Aid Network, warned that demand for food aid was growing at “such an alarming rate” that suppliers were struggling to keep up.

“Britain’s food insecurity crisis is getting worse by the day and its long-term impact will be devastating,” Ms Goodwin said.

“At the very least, benefit payments should be repriced in line with inflation and priority cash interventions should be prioritized.”

Feeding Britain reported that demand had increased by at least 30% at its food clubs over the past six months, with some centers seeing a 100% increase.

“The frequency with which people need our services and the amount of food they need has increased,” said Feeding Britain national director Andrew Forsey.

Despite increasingly desperate pleas from campaigners, the Chancellor has yet to announce additional financial support for struggling households.

Rishi Sunak said on Friday he had been powerless to increase benefits for struggling families due to an outdated government computer system – a claim disputed by critics.

According to Give Food, a charity that maintains a database of food banks, requests for food from charities have increased by 24% in the last month alone.

“The number of items food banks have to donate is the same as we would normally expect as we approach the peak of winter, but it’s still only spring,” said Jason Cartwright, founder of Give Food. .

Batley Food Bank in West Yorkshire is among those working hard to keep up. He launched a donation drive after reporting he was dealing with an “unprecedented” number of service users.

Nina Parmar, manager of the Sufra food bank in Brent, north-west London, reported a sharp increase in the number of people coming in for the first time.

“Food poverty is not something that happens in a silo. If people come to us, it’s because they have already had to make compromises, decide to put fuel in their car to go to work , or to fill up their energy meter.

Rising rents were also becoming a major issue in the area as landlords sought to pass their rising costs onto tenants, Ms Parmar said.

Some food banks are preparing to hire new staff to meet growing demand. Teresa Williams, food bank coordinator Chipping Barnet, said the organization was looking for its first paid manager after a “huge increase” in staff.

The national food aid charity, the Trussell Trust, said it distributed 2.1million parcels last year. The figures for January and February this year were 22% higher than those for the same months in 2020, before the pandemic.

New figures from the ONS show that around 88% of adults have reported an increase in their cost of living in the past month.

Around 85% of Britons polled also pointed to rising gas and electricity bills, with 79% saying fuel was more expensive over the period.

Almost six in 10 – 58% – said they were most concerned about the high cost of gas and electricity bills.