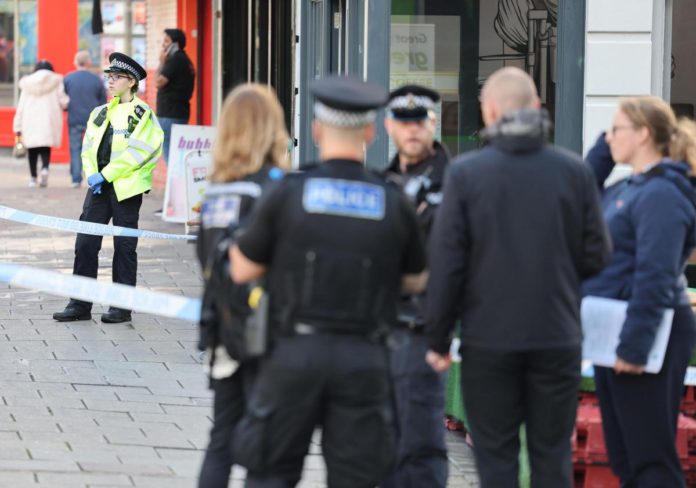 FOUR people were arrested following an attack in the city center which left a man seriously injured.

Police were called to Western Road, Brighton, yesterday afternoon at around 2.20pm after reports of a fight between a group of people, some of whom were carrying weapons.

A man was found in Elm Grove with serious injuries and was taken to hospital.

A police cordon was set up after the incident, with witnesses reporting ‘shots were fired’ at a bus during the scuffle.

Police attended the scene after a fight in Western Road, Brighton

Two Brighton men, aged 53 and 29, were stopped by firearms officers and were arrested on suspicion of intentionally causing grievous bodily harm.

Two others from Brighton, aged 22 and 21, were found in a local shop and also arrested on suspicion of intentionally causing grievous bodily harm.

Chief Inspector Andy Westwood said: ‘This was a brazen broad daylight assault in the bustling town center which received a swift response from our officers.

“Thanks to the incredible teamwork demonstrated by our response, neighborhood, police and firearms teams, alongside the NPAS helicopter, we were able to quickly bring four men into custody in seen.

“This was an isolated incident with no wider threat to the public, which is being fully investigated.”

Anyone who witnessed the incident, or the events leading up to it, is asked to contact the police online or by calling 101, quoting serial 775 of 24/05.