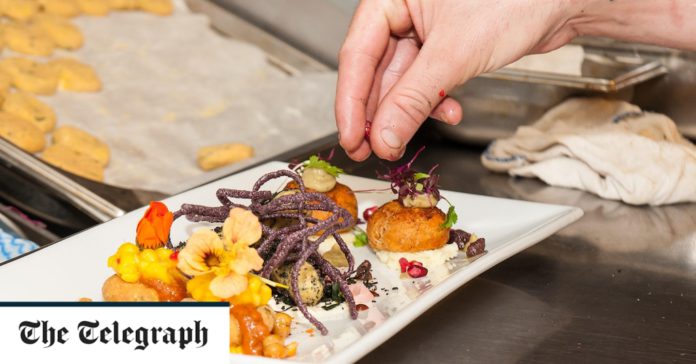 It’s no surprise that Totnes in Devon is home to some of the best vegetarian food in the country, with its alternative and new-age reputation. Willow is up there with the best, serving dishes that stalwarts of the vegetarian restaurant scene will recognize – quiches, curries, falafels – but doing it better than most, and at decent prices to boot.

With stellar seasonal small plates based on what’s available, served on four- or six-course tasting menus, Birmingham’s Land has attracted a fervent fan base, boosted by a gushing review in the Observer in 2020. you get lots of Ottolenghi-style roast vegetables, with a nod to Asian ingredients too.

Part of a multi-faceted community space run by a council, this vegan cafe offers one of the most affordable meals around, with the set lunch costing just £8. The plant-based menu changes regularly, but expect a lunch to include dishes like roasted cauliflower and black bean curry, rice pilaf and salad, followed by a latte cake. cardamom.

This Nottingham restaurant focuses on simple, fresh dishes prepared with local ingredients and avoiding animal products. Having only been open for a few years, No Twelve has won numerous awards for its “elevated vegan cuisine”. Expect fake meats and cheeses taken to another level, as well as thin cauliflower pies, teriyaki tofu skewers and brilliant desserts.

A Lancaster establishment for 25 years, Whail Tail is a traditional British cafe, but vegetarian. Think a buildable breakfast menu with all the classics, even a vegan black pudding option. For lunch, there are jacket potatoes, vegan burgers, and tofu BLTs. Affordable, no frills and delicious food.

Chester has become something of a foodie hub in recent years, and that’s certainly the case for vegetarian and vegan food too. The town has a plethora of fast and cheap food options, but Hypha brings a level of sophistication, with its ever-changing “micro-seasonal” tasting menu. Awarded a Michelin Green Star in 2021 for its sustainability efforts.

This popular Manchester spot is not only vegan, but also gluten-free. Like many new wave vegan spots, it focuses on locally sourced, seasonal ingredients. The menu is globe-trotting, from chestnut bourguignon to mushroom ramen, from “fish and chips” to tofu laksa.

With longstanding Indian and Pakistani populations, it’s no surprise that some of the best vegetarian cuisine in the country can be found in Bradford. Prashad, run by a Gujarati family, aims to blend both the traditional and the modern. The five- and seven-course tasting menus are available in vegetarian or vegan options, and include dishes like paneer tikka, masala dosa, and kofta. Couples should seek out the excellent value prix fixe menu, at £38 for the pair.

An iconic cultural space that includes a music and cinema room as well as all kinds of creative arts, Le Public Space now also has a bar with an all-vegan menu. The offering is centered around fast food and pub classics, so expect burgers, chicken wings, pies and more. Perfect food after the concert.

Eartha is part restaurant, part plant store, part delicatessen. Come for the succulents, stay for the excellent cuisine from the team behind Herbivore (which runs another restaurant in town). At Eartha, expect local produce handled with care on a menu that changes regularly.