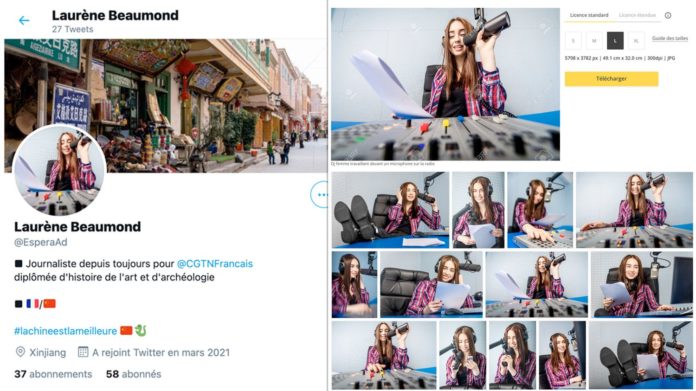 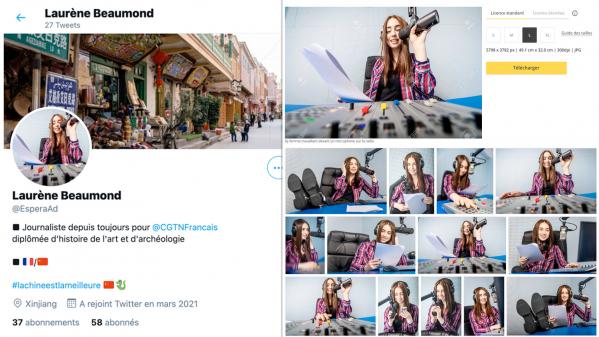 In an op-ed on Chinese state television CGTN, which recently obtained permission from the CSA to broadcast in French. This young woman, who presents herself as a freelance journalist based in France, dismantles the accusations of genocide and persecution suffered by the minority orïghoure.

Except that this ”Laurene Beaumond “, who says he has visited Xinjiang several times, does not have a press card, according to our colleagues from World who have not found his trace in the file of the Commission of the identity card of French professional journalists. On his Twitter account, created in March 2021, it is also an illustrative photo, available for purchase in image banks, which serves as a profile photo.

An “ editor’s note ” precedes the article published on francais.cgtn.com, to present the supposed author: ” Freelance journalist based in France, with a double degree in art history and archeology at the University of Sorbonne-IV and holder of a master’s degree in journalism, Laurène Beaumond worked in various Parisian editorial offices before posing her suitcases in Beijing where she lived for almost 7 years. “ However, outside this forum, a search on Google does not reveal any article with the occurrence “Laurene Beaumond”. Strange, for a journalist who lived in China and collaborated with “several newsrooms in France”.

“Laurène Beaumond”, in a long speech, refutes the accusations formulated by those who denounce the sterilizations of women orïghoures and the forced labor of this Muslim minority. “Where do these new pasionarias of the ‘Uyghur cause’ come from, this ethnic group whose fate had not preoccupied anyone until now?”, can we thus read. A ” parody of trial made remotely in China ”, writes “Laurene Beaumond“, without “no concrete evidence”. According to her, there are no Chinese re-education camps, contrary to the surveys documented by some researchers that she therefore describes as “new pasionarias of the Uyghur cause”. And to describe the happiness Uyghurs have in living in Xinjiang, where she is said to have visited a dozen times between 2014 and 2019. An idyllic picture that echoes Chinese propaganda point by point.

According to Antoine Bondaz, researcher at the Foundation for Strategic Research, which recently paid the price for the attacks on the Chinese ambassador, the false profile of Laurène Beaumond appeared at the end of 2020. On Twitter, he invited the journalist to the interview, if it exists …

I dare not imagine that @CGTNFrench who has just obtained the authorization by the @csaudiovisual to broadcast in France publishes articles on Xinjiang written by fake profiles posing as journalists based in France, such as “Laurène Beaumond” https://t.co/XNVB87YaWE