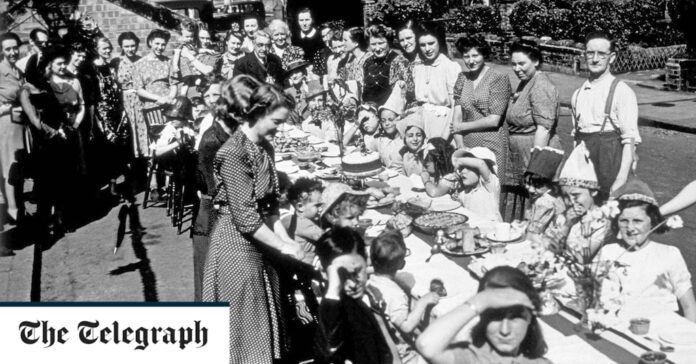 However, on Victory Day, the Prime Minister had lunch at Buckingham Palace, where George VI practiced remarkable austerity, and the food was deemed somewhat miserable (the King and Queen had ration books like everyone else) . Later that day, he gave a speech from the balcony of the Ministry of Health, to which thousands of spectators cheered. As he left, he spotted his cook, Georgina Landemare, described by his colleagues as “ a woman who excelled at her craft, ” and rushed towards her, shaking her hand and declaring that he would not have could achieve victory without it. She later said that cooking for him was her “war job” and her words meant more than anything.

Most people celebrated at home, with friends and with foods they had deliberately set aside for the end of the war. Marguerite Patten, who had been on the Kitchen Front team, broadcasting cooking tips and recipes for the BBC, later said: “You can’t overstate the joy of this day.

In Sheffield, Edie Rutherford opened a tin of asparagus tips and a tin of tomatoes. Joan Wyndham had canned fruit – a reckless amount of points if bought through the ration. Researcher and conscientious objector Ernest van Someren let his children have chocolate spread. Vere Hodgson’s party included an ersatz champagne. Canned grapefruit. Salad, tongue. Box of crayfish – and a plum pudding. We had all saved these meats for a long time. Their host even had real coffee, followed by “his piece de resistance, the port of 1898… or such a date”.

Elsewhere, the drink of choice was gin, sherry, or the ingredients of cocktails that had seen better days. Freddy Dyke commented with regret that in Warwickshire “the party went on all night long provided you can get up after consuming so much beer or alcohol”.

For some, the celebrations continued until the weekend, when street parades and organized parties took place. Roads filled with hastily assembled trestle tables, and communities gathered to make food. Even as they happily lowered the blackout curtains, the women wondered how to provide sandwiches for the holidays when they ran out of butter. The solutions were the same as ever: simulated bananas made from parsnip and banana essence, simulated lemon curd thickened with arrowroot and rutabaga, carrots added to as many things as possible, and cakes. made with baking soda and a teaspoon of vinegar from the eggs. Except for the last one, none of them are worth trying at home.

For many children, these parties represented their first taste of ice cream as the freezers were briefly turned back on. The custard powder made a decent base, flavored with jam or mashed fruit. Trivia was possible, with jelly from a packet and preserved cake crusts. The pastry was made with self-rising flour to give it a chance of lightness against the very dark whole National Flour. Introduced at the start of the war, it had a high extraction rate – meaning it retained most of the grain, so it was more nutritious but very heavy. The white flour disappeared for the duration.

Choux pastry became an unexpected hero, because it could be made with dried eggs and filled with almost anything. There was no frosting, but the decorations could be made with paper and fabric, fresh flowers and buntings, which were absolutely not subject to the restrictions on the fabric.

The conditions of war were certainly not over. Rationing would worsen immediately after the war and would remain in place until 1954. But Victory Day was a release for years of pent up emotion and hard work; it was a reward and a promise. Likewise, the end of the lockdown will not be the end of the global effort to contain the coronavirus, but it will be a chance for us to break down our pantries and share (at a socially responsible distance) what Churchill called ‘a brief period of rejoicing’.

A ration guide: a typical weekly ration for an adult in 1943