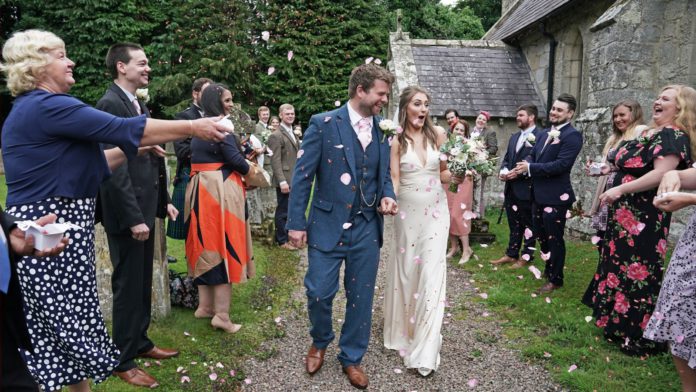 The limit on the number of people who can attend weddings in England will be removed from June 21 – but the rules on singing and dancing will remain, the government said.

Prime Minister Boris Johnson has confirmed the 30-person cap for wedding ceremonies and receptions will be removed as planned, as he announced a four week deadline at the end of all COVID restrictions.

Further restrictions relaxed ahead of the new Freedom Day on July 19 will see at least 40,000 football fans allowed inside Wembley to watch the Euro 2020 semi-finals and final.

The Wimbledon Tennis Championships will also have crowds at full capacity to watch the men’s and women’s final – the first outdoor sporting events in the UK to do so since the start of the coronavirus pandemic.

Limits on guests to weddings beyond June 21 will be set by wedding venues based on social distancing requirements, the prime minister said.

The couples had expressed fears their wedding plans could be ruined if the 30-person limit was not lifted as part of England’s roadmap to get out of lockdown.

However, Tory MP Elliot Colburn said raising the ceiling on wedding guests was a “smokescreen” as many restrictions will remain when couples get married, including limits on singing and a ban on dancing, at the wedding. except for the first dance.

He said he “was thinking of those other 50,000 couples whose dreams of getting married in the weeks to come have been sorely dashed today.”

“Raising the numbers ceiling is a smokescreen when the majority of what most couples would expect to do at a wedding cannot happen,” Colburn wrote on Twitter.

“I am very sorry that many couples, like us, are now considering postponing their marriage for at least the second time, but in some cases the third or even more than that.”