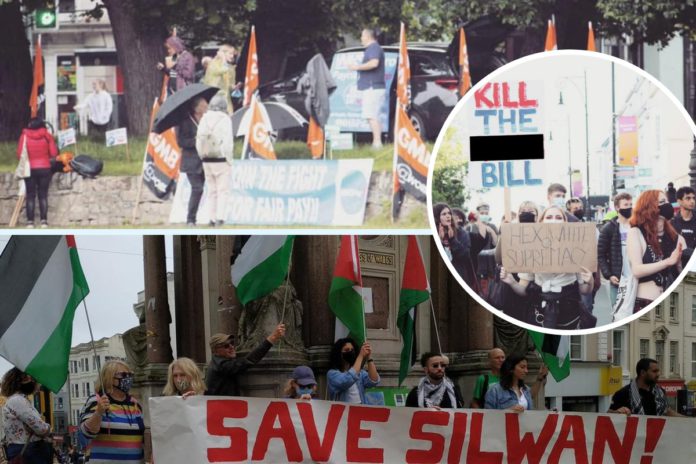 Kill the Bill, Save our NHS and Free Palestine all staged protests on Saturday.

The first of the day was the Free Palestine demonstration, organized by Brighton and Hove Palestine Solidarity Campaign. At midday the protest started at Jubilee Clock Tower in North Street, Brighton.

Protesters waved flags in solidarity with residents of Silwan in Jerusalem, Israel. They also held banners that said, “Save Silwan”.

The first of these protests took place in May and the next is scheduled for July 10.

Save our NHS was the next protest to watch. Activists gathered at 2 p.m. at The Level in Union Road, Brighton.

The protest took place on the 73rd anniversary of the founding of the NHS.

Protesters joined with others across the county to demand “patient safety, justice and an end to privatization.”

They also had banners that said, “Join the fight for a fair wage” to try to encourage more support.

The protest was organized by campaign groups, Keep Our NHS Public, Health Campaigns Together, NHS Workers Say No and NHS Staff Voices.

The last demonstration of the day was the Kill the Bill walk at 5 p.m. at The Level. This event was the most important of the day.

They marched to Brighton Police Station on John Street, then to the Jubilee Clock Tower where speeches were made.

The walk then resumed through town before ending at The Level at 7:30 p.m.