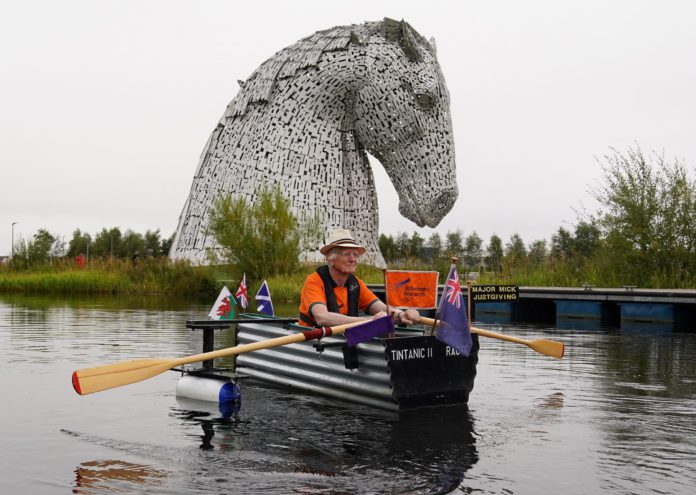 A RETIRED Army major who rows 100 miles across the country for charity in his homemade pewter boat loved to glide past Kelpies’ “magnificent” sculptures.

“Major Mick” Michael Stanley rowed down the Forth and Clyde Canal in his boat the Tintanic II as part of his challenge to raise funds for Alzheimer’s Research UK.

The 80-year-old rode 100 miles rowing at 2 mph twice a week along the Chichester Canal last December during the first Tintanic, raising over £ 44,000 for his local hospice.

He pitched at Henley on Thames in May for his second challenge and has since rowed places such as the Kyle of Sutherland and the Falkirk Wheel in Scotland.

On his last row north of the border on Friday, he visited The Kelpies, two 30-meter-tall steel sculptures depicting horse heads designed by sculptor Andy Scott.

Mr Stanley told the PA News Agency: “At The Kelpies, I was paddling up and down a short stretch of the canal.

“Normally when I go in the water I do three miles, but it was a bit of fun locally with the Kelpies which are beautiful sculptures and I just wanted to go see them and row along the Forth and Clyde Canal next door. of them.

“It was fantastic sculptures, absolutely breathtaking and I wouldn’t have missed it for anything, it’s so wonderfully organized and clean and a really lovely atmosphere.”

The 80-year-old has rowed around 94 miles so far and estimates he will have covered between 115 and 120 miles by the time he completes the challenge later this month in Chichester.

Over £ 7,700 has already been raised on a JustGiving page for the challenge, at https://www.justgiving.com/fundraising/majormick-tintanic

The retired army officer, who served in the Royal Scots Dragoon Guards for 35 years, sold his original Tintanic boat for £ 480 for charity.

Mr Stanley, of West Wittering, West Sussex, said his new boat was up to the challenge.

He said: “The Tintanic II holds up really well, the modifications I made to the original Tintanic last year really eliminated all the leaks I had last year, it holds up well and I hope. that he will do a few more miles. ”