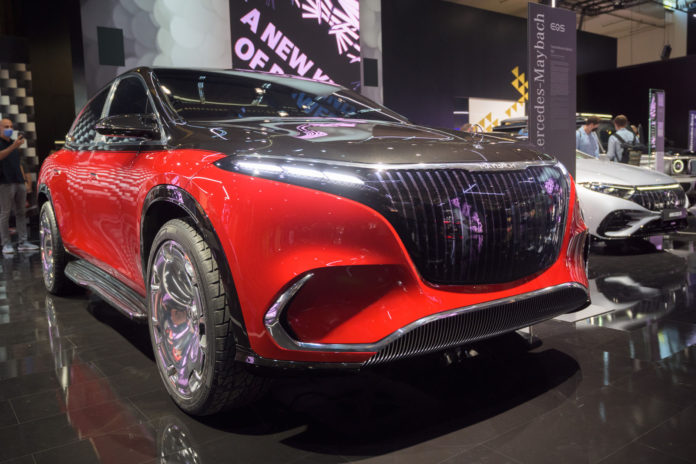 Mercedes-Maybach previewed its first electric SUV by unveiling the Concept EQS at the Munich Motor Show.

Scheduled to be introduced in the UK in 2023, it is based on the upcoming Mercedes-Benz EQS SUV, with a series of Maybach-specific elements, including the brand’s two-tone paint scheme and bespoke cabin layout. with individual rear seats providing “first class” accommodation.

The Benz badged EQS SUV will be Mercedes’ third bespoke electric model after the EQS and EQE sedans, offering a range of around 373 miles.

The intention is to position it at the top of the ranks of electric vehicles in a market segment that has not yet entered by traditional rivals Maybach, Bentley and Rolls-Royce.

Maybach’s shift from internal combustion engines to battery-powered electric powertrains is in part driven by a shifting customer base for its more expensive models.

“Customers in key markets such as China, Russia, South Korea, the United States and Germany are getting younger – and with that, the definition of luxury is also changing,” the company said.

The Concept EQS is based on Mercedes’ new MB.EA platform for electric vehicles. Details of its powertrain have yet to be revealed, but Autocar has learned that the production version will use a similar setup to the new AMG EQS 53 sedan, with a pair of electric motors together developing around 650bhp and 700lb. ft of torque.

In a similar approach to that taken with the more recent Maybach variants of the S-Class and GLS, the Concept EQS SUV retains the same body structure as its donor Benz model but updates it with a series of traditional design cues. . The front is dominated by a newly designed version of the black EQ family ‘grille’ with graphics in the same style as the chrome grille and vertical slats on today’s Maybach models.