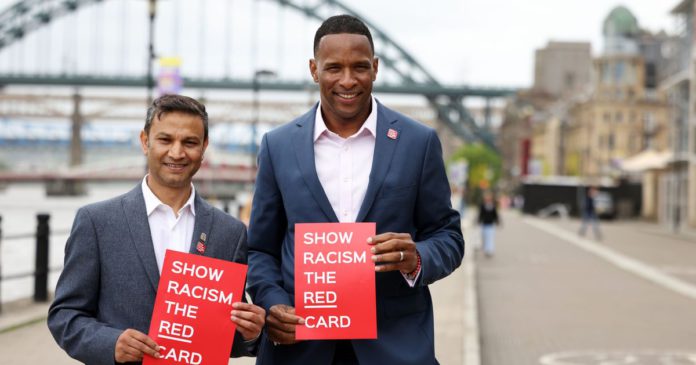 The Deputy Mayor of Newcastle City Council expressed her pride when former Newcastle United goalkeeper Shaka Hislop was given the freedom from Newcastle.

Councilor Karen Kilgour said Hislop “used his status as a black professional footballer” to challenge racism in society during a ceremony at the Civic Center on Friday night.

Hislop was the victim of a sickening racist attack by young people and from there he helped found Show Racism the Red Card, which became the UK’s largest anti-racism education charity.

Show Racism the Red Card celebrates its 26th anniversary this year. Since 1996, more than 850,000 young people have taken part in the association’s anti-racism workshops.

Coin Kilgour said racism towards football had “not gone away” and said the work of Show Racism the Red Card continued to be “vital”.

She said: “Shaka Hislop realized he could use his status as a black professional footballer to make a difference and through education could challenge racism in society.

“He and his team-mates spoke at schools in Newcastle about his experiences and from there grew what is now internationally recognised, although I am really proud to say he is still based in the North East.

“As you have seen in recent years, racism towards footballers and in society at large has not gone away. The heinous racist abuse suffered online by young black English players after defeat in the Euros final 2020 is proof of that.

“Our footballers continue to take a knee before every game to speak out and speak out against racism and racist discrimination.

“The Black Lives Matter movement is more important and relevant than ever and the work of Show Racism the Red Card continues to be vital. And it is in this context that I was absolutely delighted to nominate Shaka Hislop for freedom of our great city.”

Hislop told Chronicle Live today: “It means an awful lot to me. Such an honor, although my mind goes back 25 years when this campaign started.

Speaking about getting Freedom of the City, Shaka said, “That (Freedom of the City) wasn’t our motivation, it was going to schools and communities with my teammates and trying to give back. This was a town where we plied our trades and raised our children.

“Coming from where we are now and seeing all that this campaign has achieved over the past 25 years has been surreal in some ways. It is an incredible honor to receive this award on behalf of so many who have contributed.